An interesting character that I write about in Backcountry Lawman is Roger Gunter, the most notorious poacher in Putnam County.  The majority of the photos below were taken in October 2007, during a series of four recorded interviews I had with him. He was 69-years-old then, and I was 54, recently retired from the Florida Fish and Wildlife Conservation Commission.

The first interview did not come easily. I repeatedly cajoled him, and even solicited the help of his wife behind the scenes. Every time I asked him for an interview I got the same, terse reply, “I got too many secrets.” Finally, one month before I would  hang up my gun, he told me, “Okay, you can come over to the house, but only after you’ve officially retired.” It had taken five years. 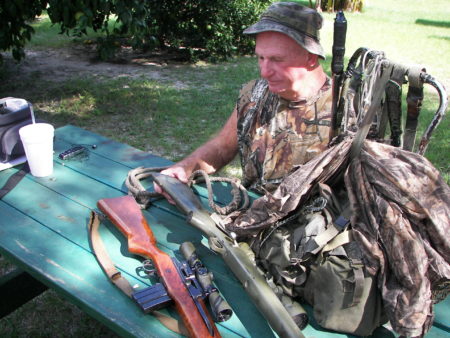 One of the things I always made a mental note of when sizing up poachers was whether or not their personalities were “organized” or “disorganized.” This photo reveals Roger is very organized. The tip off is the grapefruit tree behind his right shoulder. Look underneath it and you will see a weed free circle of dirt. The leaves also have a dark-green color indicating they have been carefully tended and properly fertilized.

The yard of a disorganized poacher will be littered with trash, children’s toys, junk cars, and the like. Very often, when we stepped into one of their backyards we would find parts of a deer carcass laying out in the open, swarming with blow flies. That would never happen with Roger. 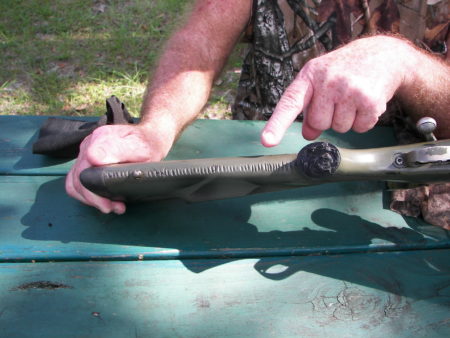 Roger points to the bottom of a rifle stock, each notch represents a dead deer. The forearm of the gun has an equally impressive number. At one time he killed 50 to 60 deer a year, many of them out of season or at night. 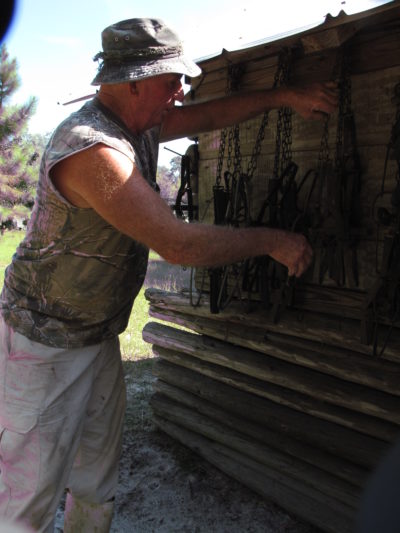 I asked Roger when he’d last run steel (leg-hold) traps. He told me about five years before (2003). No one had ever come close to catching Roger with these illegal traps that are used to catch furbearers, such as otter, bobcat, and raccoon. In fact, I’d never found one of his. 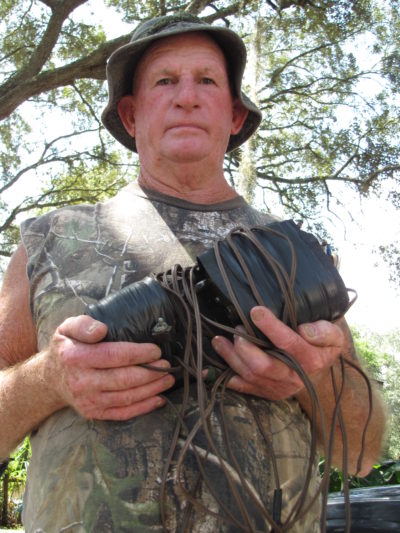 The electric shocking device was once an instrument of choice for outlaw commercial fishermen on the St. Johns River. A two man team could typically catch 400 to 600 pounds of catfish in a four hour period. 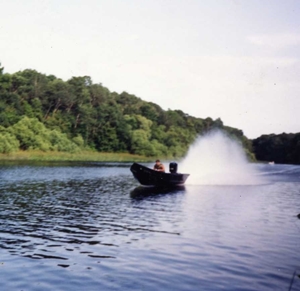 Roger pilots an outlaw commercial fishing skiff at 70 MPH. Imagine what it would be like to chase him at four o’clock in the morning with his lights blacked out.  To find out, read Chapter 11 in Backcountry Lawman. By permission of the Gunter family. 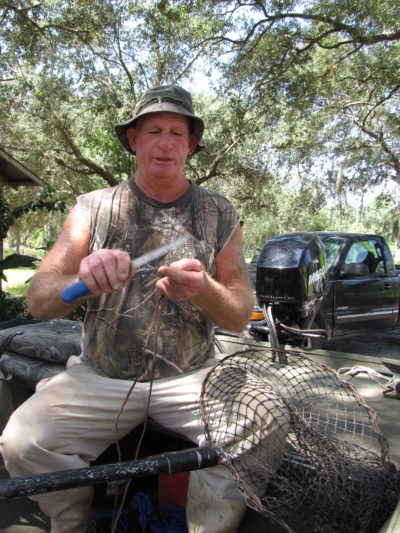 Roger demonstrates how to trim the insulation from the tip of a copper wire used in electric fishing. 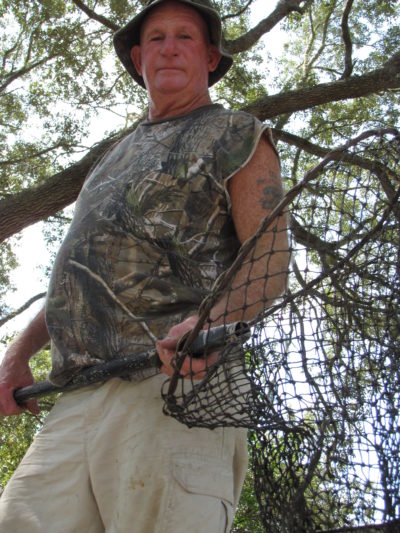 Homemade, long-handled dip nets were often used to scoop up shocked fish. Roger constructed his using 14′ hollow, aluminum handles, with holes drilled in them every eight inches to allow air bubbles to escape. That way, if he spotted the game warden, he’d toss them into the river, and the net would quickly sink out of sight. 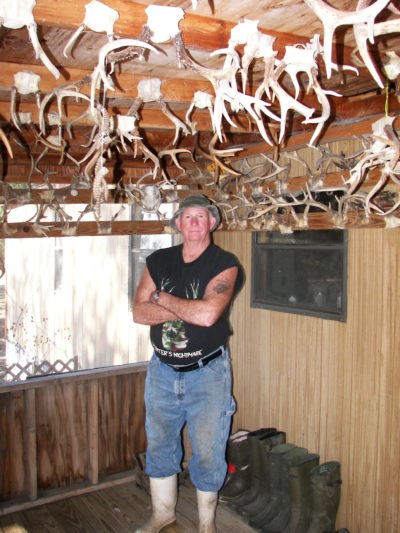 This is the front porch of Roger’s double-wide mobile home, located ten miles southwest of Palatka. Again, the organization jumps out in this photo. It may seem like a small thing, but check out the neatly aligned pairs of rubber boots against the wall. 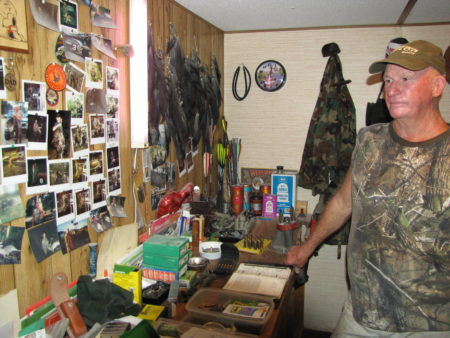 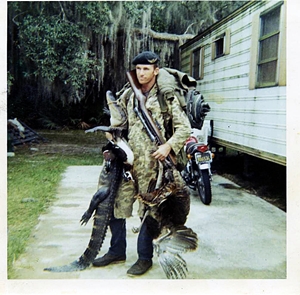 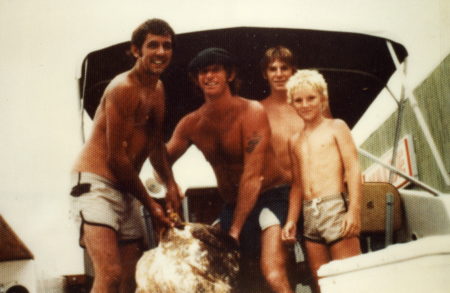 Roger wears a cap in this photograph, taken in his younger days with his good buddy, Frank Keen (left). They hold up a giant jewfish shot with a spear gun while diving in the Atlantic Ocean offshore from St. Augustine.

During another diving excursion, Roger nearly died from the bends when he ran out of air and did not have time to decompress. Two sessions inside a hyperbaric chamber saved his life. He told me what got him into trouble was a school of grouper he spotted huddled up under the hull of an old freighter in a 105-feet of water. “I already had a big stringer of fish,” he recalled,  “but I had to kill me one more” (even though he knew he was running out of air). By permission of Frank Keen. 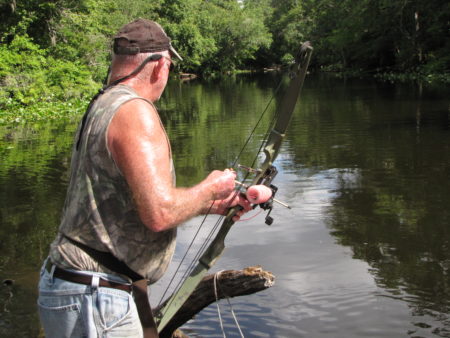 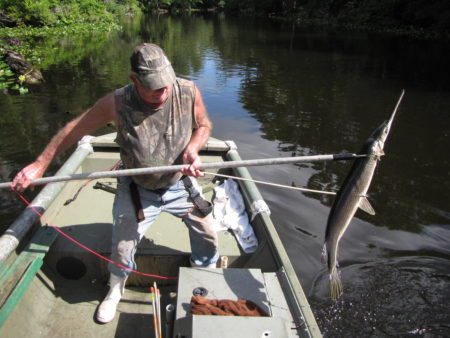 Part 2–Garfish is gigged immediately after the shot. Roger then cuts the sacks of roe out, which he later sells for bream bait. Note: gar roe is poisonous to humans! 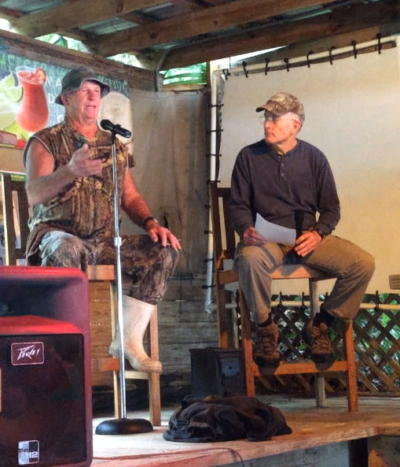 The author (left) and Roger Gunter telling stories at the Welaka Lodge and Resort, 2014.

I write about Roger in four chapters of Backcountry Lawman, offering a rare glimpse into the mind of a serial poacher.