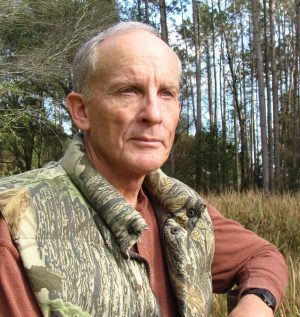 I’ve lived in Florida all of my life. I was born in 1953, and grew up on the shores of a small lake in the community of Lutz, thirteen miles north of Tampa. In June of 1975, I graduated from the University of South Florida with a Bachelor of Arts degree in Criminal Justice. My wife and I moved to Putnam County in 1977, my first duty assignment as a St. Johns River water patrol officer with the then Game and Fresh Water Fish Commission. I received a promotion to lieutenant in 1989 and became land patrol supervisor over Putnam, St. Johns, and Flagler Counties until the end of my career.

My interest in the great outdoors kicked in mightily about the time I reached nine years of age.  That’s when my parents bought 154 acres of land in rural Levy County, located near the island fishing village of Cedar Key, on Florida’s west coast. Back in the early 1960s, this was wild country and my mom and dad and I would travel two miles down a dusty, washboard road just to access the property. When the summer rains came, the road often flooded making it impossible to traverse–at least in an old Ford station wagon with weak valves, worn cylinders and four balding tires that offered questionable traction.

Why did my parents buy land in such an obscure location?  Even though my dad worked for the US Postal Service, he’d always dreamt of becoming a cattle rancher. So every other weekend we packed up and headed north. We hacked and cleared and planted pasture grass and managed to keep a herd of 40 Angus cattle going for a while. I would often walk the two miles around the border of our property with a shotgun hoping to find a deer to shoot. But there were no deer to hunt, as most had been killed off by a screwworm infestation or shot by poachers. When I looked beyond the ragged strands of rusty barbed wire that defined our property boundary, I saw distant tree lines that belonged to others. And I often wondered what it would feel like to hop that fence and keep right on going, without any questions asked or anyone to stop me. I was convinced it would be the grandest of adventures.

When I first began working as a game and fish officer in December of 1977, the poaching in Putnam County was rampant. As a young, newly minted, twenty-four-year-old wildlife officer, it was all that I could have ever hoped for. Suddenly being thrust into the riverine swamps and tangled thickets of Florida’s backcountry in search of hardened wildlife crooks seemed like a perfectly normal thing for me to do. The remote, often solitary work was a natural fit for my personality, since I’d been raised as an only child and was used to providing for my own entertainment. But best of all, while on patrol I had the freedom to legally jump any fence at any time and keep right on truckin’. The poacher who killed these four hen turkeys had the reputation of being a crack shot. He shot them through the head and neck region “off-hand” (no rest) with a .22 rimfire rifle.

During my journey in conservation law enforcement, I met some interesting folks. Some wore a badge; but others were on the opposite side of the law. They were crusty characters who could have walked on to the movie set of an Indiana Jones film and felt right at home. In 1995, I decided it was time to put pen to paper and try to publish my first story about some of the people I’d met. It was, as they say, “A trial by fire.” A long time outdoor freelance writer and friend looked over my first draft, shook his head, and told me, “Consider what’s about to happen tough love, because it ain’t going to be pretty.” So began my introduction into the world of writing by way of copious amounts of red corrective ink.

My first story was published in Florida Sportsman. Since then I’ve been fortunate to also have been published in Flamingo, Florida Wildlife, Florida Game and Fish, Woods ‘n Water, Self Reliance Illustrated, Fate, Folio Weekly, Palatka Daily News, Lake City Reporter, Law Officer, Police, SWAT, and International Game Warden. When I retired in 2007, I decided it was time to tell about my experiences in a larger framework. The three year effort resulted in Backcountry Lawman: True Stories from a Florida Game Warden.